This $9.9 million contract was awarded to Brice, Inc. in August of 2018 and was in Kivalina, AK which lies 80 miles Northwest of Kotzebue AK. Kivalina is located on an eight mile barrier island between a saltwater lagoon and the Chukchi Sea. The project entailed building a 3642’ revetment parallel with the runway to protect it from erosion. The fall and winter storms combined with the lack of sea ice have wreaked havoc on some of the communities in Northern Alaska.

Due to the remoteness of the project, availability of equipment and materials, the project had to be built during the 2019 season. This afforded Brice one summer season to mobilize in, build the project and get out before the onslaught of winter. Production of the rock began in fall of 2018 and was resumed in 2019 once the quarry in Nome was thawed out. Production of the rock took nearly six months in total, broken up over two seasons.

Loading the rock at the Port of Nome was a monumental effort due to the busy and short arctic barging season. Brice was only allowed short 3-4 day loading windows to load the 11,000 ton barge. This had to be coordinated with harbor master in Nome as well as the rock supplier. Any slip in schedule due to weather or offloading problems had to be conveyed to all parties to ensure dock space was available.

The rock had to be trucked from the quarry in to town prior to each loadout. The haul was 13 miles and utilized a fleet of six side dumps and two end dumps. Generally, it took anywhere from 7-10 days of trucking to get the 11,000 tons to port for each loadout. Trucking needed to be stopped on rainy days due to road damage issues because of the use by residents of Nome and the surrounding communities.

In good weather it took anywhere from 2-3 transit days for the 11,000 ton barge to make its way from Nome to Kivalina. Once the charter barge arrived, the Brice articulated barge lightered off rock to the beach at 1,000 tons per load. This took five days working nonstop around the clock. As the rock hit the beach, Brice crews worked on placing it along the runway in the trench that was cut out for the revetment. Once the template was built, the excavated beach sand was placed back over top and only 2-3’ of the revetment top was visible. 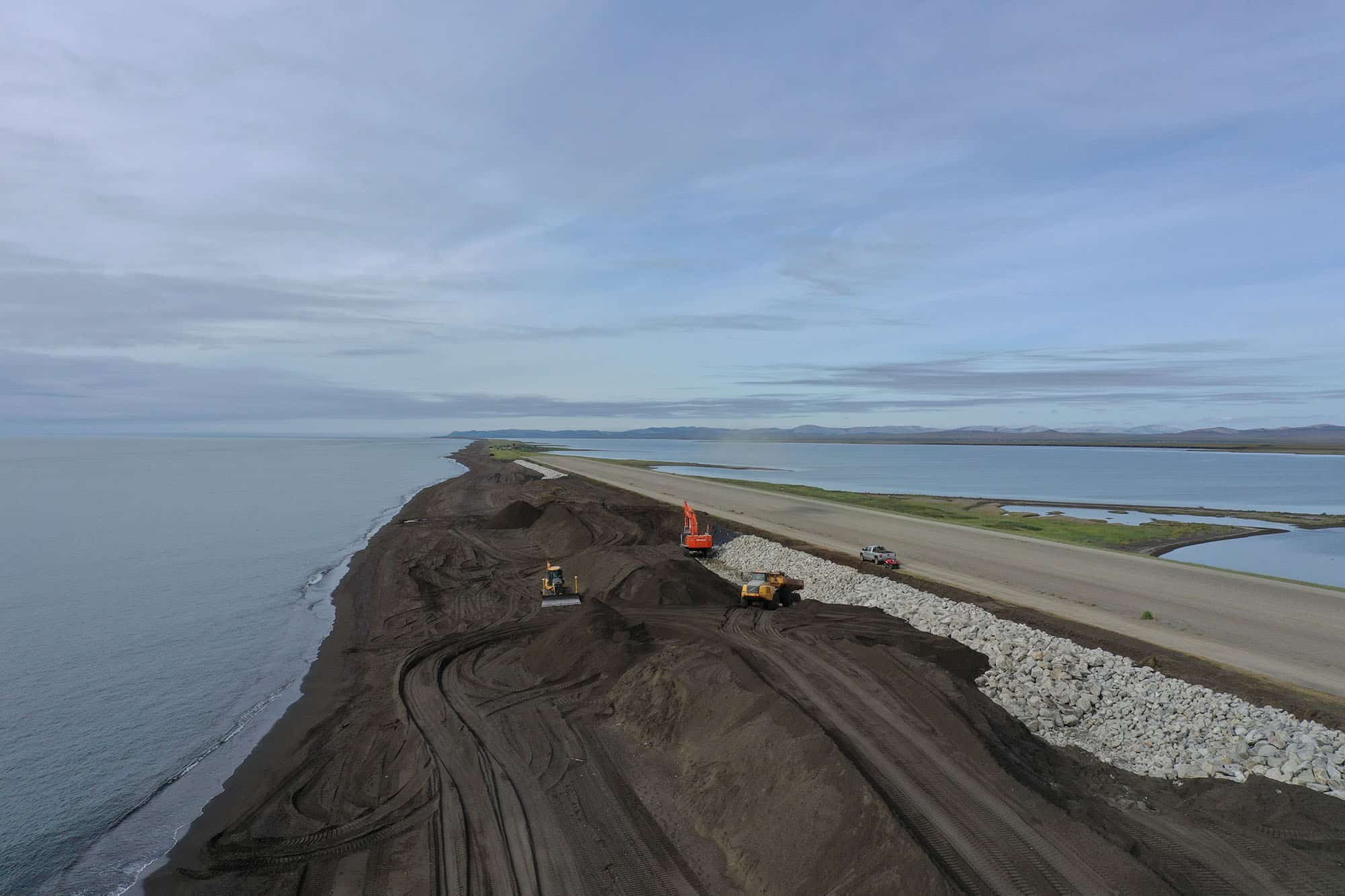