This $4.4 million contract was awarded to Brice, Inc. in September 2018. The bridge is located over the north channel of the Knik River in the middle of the Palmer Hay Flats State Game Refuge. The project encompassed taking a 667-foot bridge with 2 each 26’ approach spans and 5 each 123’ main spans, shortening the bridge by 246’ and building a new abutment with pipe pile and sheet pile, and installing 2 new approach spans and 3 123’ main spans.

Due to the late award and permit requirements that no temporary pads could be built on the riverbed before freeze up, most of the earthwork, concrete placement, and structure replacement occurred in winter conditions. This led to heavy use of tenting, heat trailers, and ground thaw machines. Gravel needed to be stockpiled before placement activities as we were mobilized shortly before the gravel trains were to stop for the season.

Toward the end of the job, an early breakup caused acceleration of activities in order to remove riverbed temporary fills before the tides washed them away. That would be a permit violation. In addition, a sand bar that was to be used for span construction disappeared when the earthquake of November 30, 2018 hit. Lifting plans had to be revised to adapt to the change.

The method used in the past to replace spans involved building trestle on both sides of the span, then building a new span on one side of the old span. During the outage (scheduled track closure) the old span would then be rolled to the opposite side and the new section rolled into position and jacked down. Brice brought in a 250T capacity crane and a 600T capacity crane and was able to eliminate the trestle construction. Two lifting beams were designed and built that could handle the loads of both the old and new spans. The old 150-ton span was picked and set aside, the new 200-ton span was picked and set into position. This greatly reduced both the span construction time and the replacement durations during outages.

The original outages were planned for 48 and 72 hours. Due to increased train traffic, especially early passenger trains, the outages were reduced to under 40 hours. Every task was scheduled out to the half hour and planning sessions the day before outages were critical to be sure Brice, ARRC, and all the subcontractors were ready for the planned sequence, with contingencies where possible.   Large penalties were to be assessed if trains were held up. With the proper planning and execution amongst our team and the ARRC for each outage, no penalties were issued. 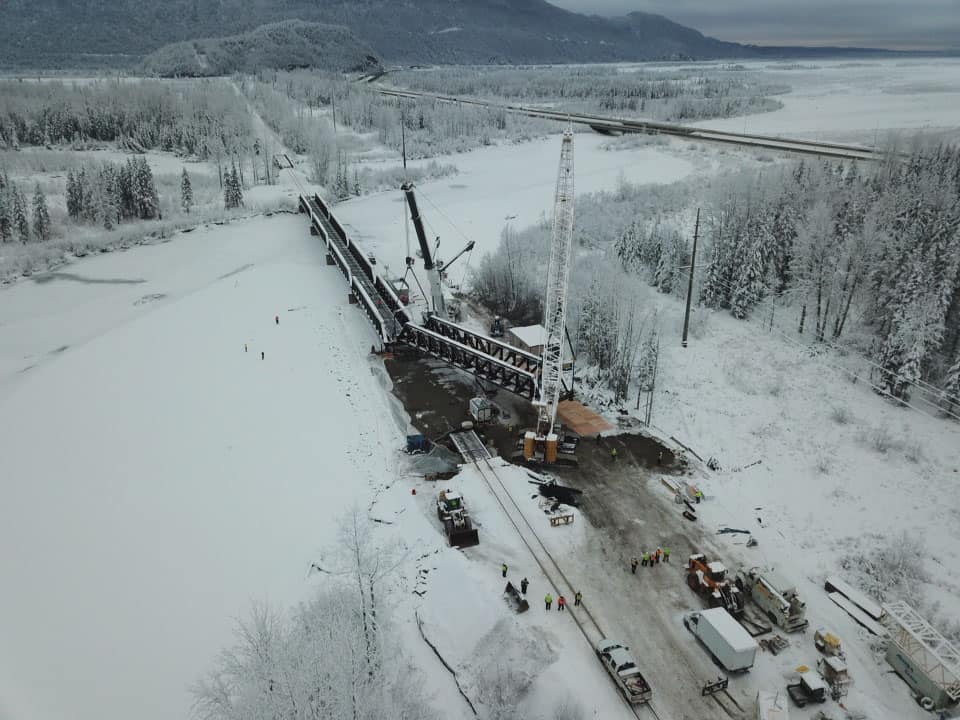