The project bid by DOT&PF and was awarded to Brice Inc. in December of 2014, before any signs of flooding. The original scope of the project was to make improvements to the existing Dalton highway including adding thermal protection of ~16 million Board feet of insulation. (That is 250,000 individual 4’*8’*2” thick sheets of foam), installing new culverts and multiplate fish passages, as well as raising the road grade 3 to 4 feet and resurfacing with e1 crushed aggregate surface course.

Overflow from the Sag river started to impact the Dalton highway in the winter of 2015. The DOT&PF responded to the flood with a separate project to divert the overflow away from the Dalton Highway. This work was not performed by Brice. DOT was able to keep the Dalton Highway operation with minimal impacts through May of 2017. As spring started, water levels grew, and the ice berms diverting water eventually overtopped, closing the Dalton highway and removing large stretches of the roadway in the process. As the waters receded, DOT&PF along with contractor Cruz, rebuilt single lane stretches through the washout in order to restore access and reopen the highway. At that point DOT’s emergency contract with Cruz was complete and Brice began working on a modified project.

Before, during and after the flood in the May of 2015, DOT&PF actively worked with Brice Inc. to change the scope of the original project into a project that would still accomplish the original goals, as well as better protect the Dalton Highway against future floods. This including adding 4 miles to the south of the project onto the original scope where flooding was an issue, (renaming the project Dalton Highway MP 397-414) as well as deleting insulation and instead adding additional borrow material to the MP 401- 405 section of the project. These changes in scope were negotiated with the DOT&PF and Brice Inc. over a few week period at the end of May 2015 and increased both the value of the project and quantity of gravel required for the new design by a factor of ~1.7 from the original quantities. Work began in mid June 2015 on developing additional material sites to meet the new quantities, as well as restoring 2 lane service to the Dalton Highway.

The DOT’s goals for the project in the first year was to get as much of the section from MP 397 to MP 405 completed so that the road would be protected should flooding occur again the next winter. When the flood happened, the water from the Sag river crossed the road in this section headed west, and then recrossed the road back into the Sag channel near the Deadhorse airport. The thought with this construction sequencing was to keep the water on the east side of the road, should flooding occur again in the same area. Because the section from 397-401 was a late addition to the process, and the Army Corp permits do not come over night, work was focused initially on the 401-405 portion of the project. The road in this stretch was raised 9-10 feet from existing ground, and was built to within a foot of finish grade during the latter part of July 2015 and the beginning of August 2015.

The army corp permit arrived on August 26th, about the time that contractors should be thinking about demobilizing for the winter. Brice Inc. was able to work a double shift until September 24th in the MP 397 to 401 section to get the road as high as possible before winter. This effort did prove to be worthwhile the following winter when flooding again occurred, but in this instance did not overtop the newly constructed road.

The following two seasons were spent constructing the original scope, including placing insulation 4” thick from MP 405 to 415, as well as final surfacing of the MP 397 to 405 section. 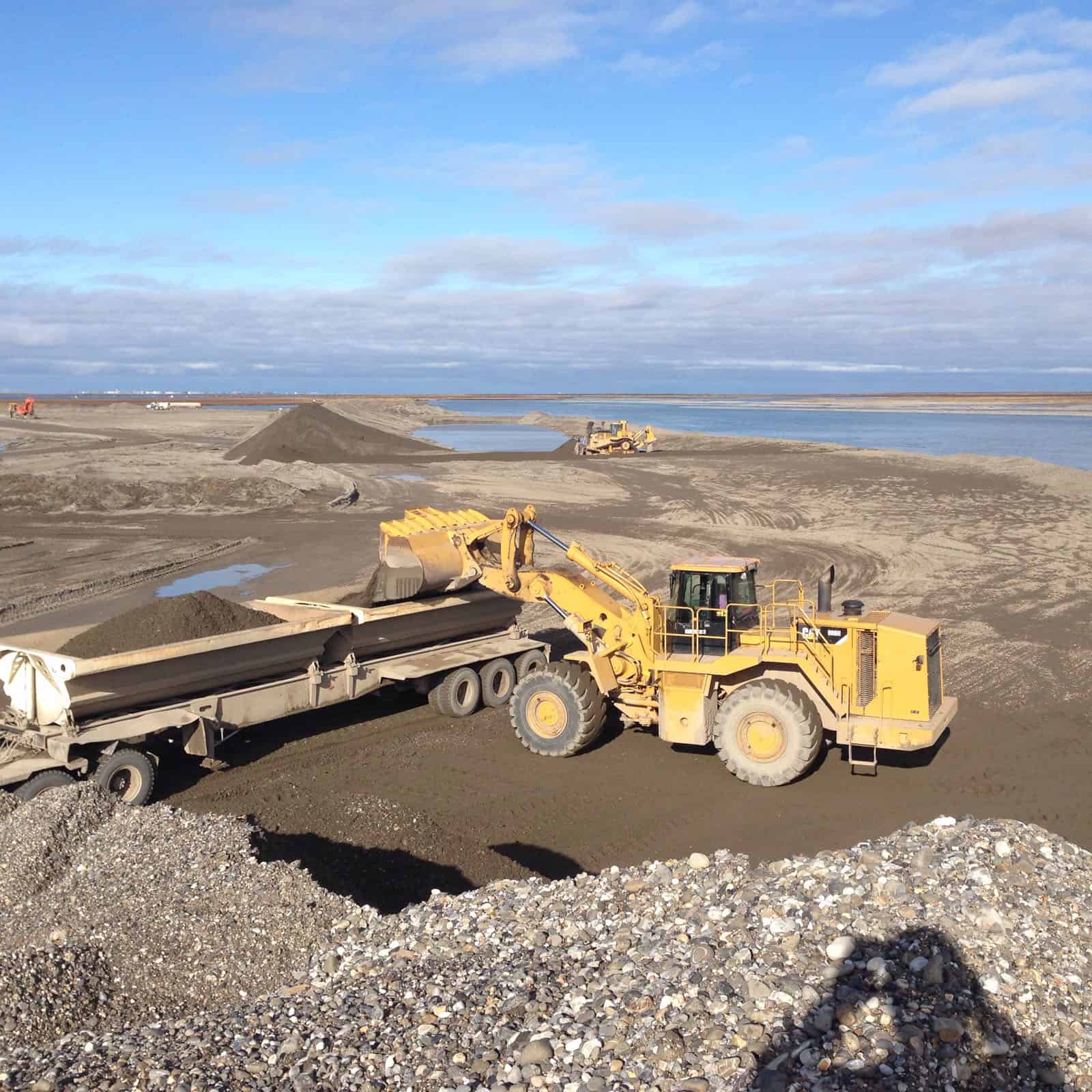